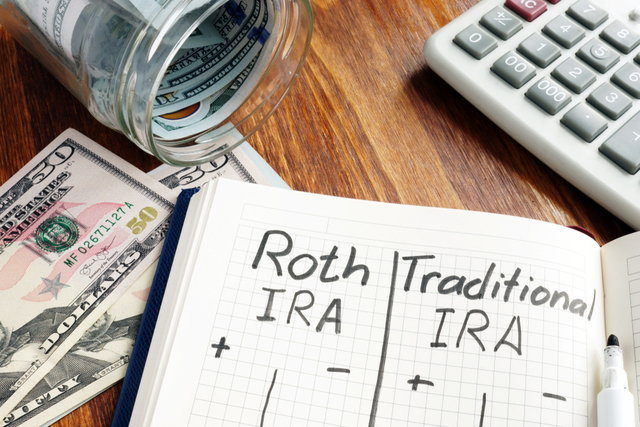 The tax code offers two types of IRAs; one is referred to as the traditional individual retirement account (IRA), so named because it was the first type of IRA available, having been created by Congress back in the 1970s. The second type is the Roth IRA, established in 1997 and named after William Roth, who was a senator from Delaware.

Traditional IRA – The tax benefit of a traditional IRA is that it provides a tax deduction for the amount of the contribution up to the maximum allowed for the year. Higher income taxpayers that also participate in their employers’ retirement plans, such as a traditional pension plan or a 401(k) plan, can make contributions, but the deductibility of their contributions phase out as their adjusted gross income (AGI) increases.

The annual contribution limits are inflation adjusted periodically and include an additional catch-up amount for taxpayers age 50 and over.

The traditional IRA deduction begins to phase-out when an individual who makes a traditional IRA contribution is also an active participant in a qualified retirement plan and their AGI has reached certain inflation-adjusted thresholds. The deduction is fully phased out for unmarried filers when their AGI reaches an amount $10,000 over the threshold. For married taxpayers and certain surviving spouses, full phase-out is achieved when their AGI is $20,000 over the threshold. Those using the married separate filing status who are active participants in their employer’s qualified plan generally are not allowed a deduction once their AGI reaches $10,000.

Generally, when funds are withdrawn from an IRA, the distribution is fully taxable, including the amount contributed and the earnings. An exception applies when a taxpayer elects not to take a deduction or when the deduction has been phased out. Contributions that were not deductible are recovered tax-free proportionally to each distribution. For example, if 8% of the overall contributions to a traditional IRA were nondeductible, 8% of each distribution will be tax-free and 92% will be taxable.

Traditional IRAs are recommended for those that may need a tax deduction in order to afford to make a contribution or those who are contributing later in life and cannot substantially benefit from a Roth IRA’s tax-free accumulation and whose income during retirement will be in a tax bracket substantially lower than it was when they were making the contributions.

Roth IRA – The tax benefit of a Roth IRA is quite different than that of a traditional IRA. With a Roth IRA, a taxpayer gets no tax deduction when contributions are made. However, the taxpayer gets tax-free accumulation, and at retirement, all distributions are tax-free, including the account’s earnings (if a five-year required holding period is met).

The annual contribution limits for a Roth IRA are the same as for a traditional IRA, including the need for earned income. However, for higher-income taxpayers, the amount they can contribute to a Roth IRA is reduced as their AGI increases above an inflation-adjusted threshold established for their filing status.

Selecting the IRA Type for You – If you are going to include an IRA in your retirement planning, a decision you will have to make is whether to choose a traditional IRA or a Roth IRA. A traditional IRA provides a tax deduction for contributions and tax-deferred growth, but any withdrawal from the account is fully taxable except for non-deductible contributions. On the other hand, Roth IRA contributions are not deductible, but distributions after retirement are tax-free. A Roth IRA offers tax-free accumulation, meaning the earnings build up over the life of the IRA tax-free. Making the decision involves a number of factors, and the decision may change as finances dictate.

For those currently with low income and on a limited budget with little extra income to spare for IRA contributions, the traditional IRA offers a tax deduction, which will allow them to make a larger contribution and is better than having no retirement funds at all. In addition, lower-income individuals may qualify for (and benefit from) the Saver’s Credit, which provides a tax credit that may help them afford a contribution.

For those who can afford to make a non-deductible IRA contribution without financial stress, the Roth is the go-to IRA because of its tax-free accumulation.

Even younger individuals should strongly consider investing in a Roth IRA—the longer one has a Roth IRA, the more tax-free income it can provide.

Other Issues to Consider – Unfortunately, like everything involving taxes, there are a number of complications and special considerations.

Saving for retirement is extremely important, even if it means cutting back on discretionary spending. Choosing the right IRA or retirement plan can become complicated and can have a big impact on your current tax situation as well as in your retirement years. Please call for assistance.