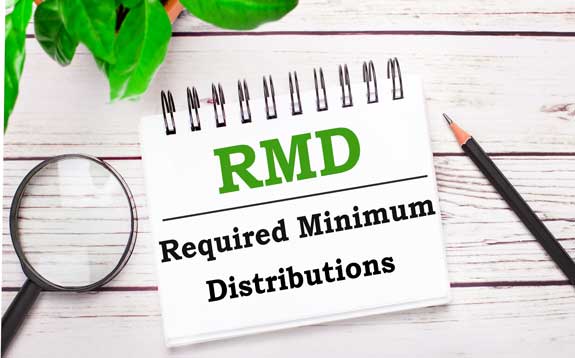 Generally, RMDs begin in the year that the retirement plan owner attains the age of 72. The first year’s distribution can be delayed to no later than April 1 of the following year.However, delaying the first distribution means taking two distributions in the following year: one for the age-72 year and one for the next year. If an IRA owner dies after reaching age 72 but before April 1st of the next year, no minimum distribution is required because death occurred before the required beginning date. A person who turned 72 in a previous year is required to take the minimum distribution no later than December 31 of each year. The method for determining the minimum amount is explained below.

Even though the tax code mandates minimum distributions after reaching age 72, there is no maximum limit on distributions, and the retirement plan owner can withdraw as much as he or she wishes. However, if more than the required distribution is taken in a particular year, the excess cannot be applied toward the minimum required amounts for future years.

The required withdrawal amount for a given year is equal to the value of the retirement account on December 31 of the prior year divided by the distribution period from a table developed by the IRS. For individual’s whose spouse is not the sole designated beneficiary, or, the individual’s spouse is the sole designated beneficiary but is not more than 10 years younger than the individual, the Uniform Lifetime Table is used.

Retirement plan owners must calculate the RMD amount for each qualified retirement account separately. However, people who have more than one retirement account of the same type don’t have to take a separate RMD for each. They can aggregate and withdraw the entire amount from just one retirement plan of the same type or withdraw a portion from each plan to satisfy their RMD. So, for example, a distribution from a 401(k) plan won’t satisfy the distribution requirement from an IRA. Similarly, a Roth IRA distribution won’t count toward the RMD for a traditional IRA.

Two tables are not illustrated in this article because of their size: the Joint and Last Survivor Table, which is used to determine RMDs when the sole beneficiary is a spouse who is more than 10 years younger than the plan owner; and the Single Life Table, which is used for certain beneficiary RMD determinations. For table values that are not illustrated above, please call this office.

If, in the preceding example, the taxpayer did not withdraw the$4,878, he would be subject to a 50% penalty (additional tax) of $2,439 ($4,878 x 50%). Under certain circumstances, the IRS will waive the penalty if the taxpayer demonstrates reasonable cause and makes the withdrawal soon after discovering the shortfall in the distribution. However, the hassle and extra paperwork involved in asking the IRS to waive the penalty makes avoiding it highly desirable; to do so, always take the correct distribution in a timely manner. Some states also penalize under-distributions.

Even though a qualified plan owner whose total income is less than the return filing threshold is not required to file a tax return, he or she is still subject to the RMD rules and can thus be liable for the under-distribution penalty even if no income tax would have been due on the under-distribution.

These beneficiary distributions include special rules for surviving spouse beneficiaries and another set of rules for others. These rules can be complex, and the following is a brief overview. You are cautioned to contact this office to determine how these rules apply to your specific situation. For simplicity, only IRAs are mentioned in the following explanations, but the provisions also apply to qualified retirement plans, such as 401(k)s.

Surviving Spouse – A survivingspouse beneficiary generally has the following options:

Eligible Designated Beneficiaries – These beneficiaries are not subject to the rule (explained below) requiring the account be totally distributed in 10 years (except as noted) and may take lifetime distributions or a lump sum distribution. In addition to a surviving spouse, this category includes:

Other Beneficiaries – Can take a lump sum distribution or:

Ten-Year Rule – While it’s true that the account must be depleted by the end of the year that includes the 10th anniversary of the account owner’s death, if the account owner died on or after their required beginning date (RBD), then the beneficiary must ALSO take annual distributions based their life expectancy and then distribute the balance in the 10thyear.

Please call us or your financial advisor for assistance determining your RMD requirements and avoid potential penalties for not complying with those requirements.